Upon occasion, an individual is the possessor of an extraordinary life résumé, the case with the woman who traversed the road from princess to empress to saint. Her story wove a tapestry that bound the threads of majesty, mayhem, and massacre.

A biblical injunction states, “For unto whomsoever much is given, of him shall be much required,” a quotation well-applied to Victoria Alix, (she went by the name Alix), Helena Louise Beatrice from the Grand Duchy of Hesse of the German Empire. Her pedigree was 14-karat: her mother, Alice, the daughter of Queen Victoria, had wed a minor royal, Louis IV, the grand duke of Hesse-Darmstadt. Tragedy descended on the House of Hesse when Alix’s brother died from a brain hemorrhage after suffering from a fall from a window. The six-year-old Alix also lost her mother and sister from diphtheria. Queen Victoria arranged for “grandmamma” vacations at Balmoral Castle, and many felt Alix was her favorite. The princess studied philosophy at Heidelberg University; strong-willed, she defied Queen Victoria’s request to marry her first cousin, Prince Albert Victor of Wales.

At age twelve, Alix met the sixteen-year-old Nicholas at the wedding of her sister Elisabeth of Hesse and by Rhine to his uncle, Sergei Alexandrovich, the Grand Duke of Serge, in Saint Petersburg. Besotted, Alix carved their names on the window of the Peterhof Palace. The teenaged Nicholas was the scion of the Romanov dynasty: Saint Petersburg bore the name of his ancestor, Peter the Great. In contemporary currency, the Romanov wealth would have ranged from $250 billion-$300 billion. Nicholas’ father, Alexander III, owned the largest yacht in existence, dozens of diamond-encrusted Fabergé eggs, paintings, and palaces. The dynasty held sway over one sixth of the world’s land mass and controlled the lives of millions.

After five years, Alix returned to Russia to visit Elisabeth and reconnected with Nicholas; they went ice skating, attended balls, and reignited their earlier spark. Before she returned to Germany, Nicholas hosted a farewell party in Tsarskoye Selo Palace that boasted two hundred rooms on eight hundred acres that included an artificial lake. Peter the Great had purchased the palace for his wife, and its magnificence put Versailles to shame. Nicholas confided in his diary, “My dream is to someday marry Alix. For a long time, I have resisted my feeling that my dearest dream will come true.” Tsar Alexander did not share his son’s feelings; as with most Russians, he was anti-German and felt an obscure princess was not a matrimonial prize. An absolute autocrat on the throne and with his family, Alexander had a disconcerting habit of bending iron pokers or cutlery to emphasize a point. The usually compliant Nicholas refused to consider another wife. At age forty-nine, Alexander suddenly became gravely ill, and in the belief Nicholas would be a more effective ruler with the stability of a spouse, he granted permission. Initially, Alix rejected Nicholas’ proposal as she was a devout Lutheran and, as Tsarina, she needed to embrace the Russian Orthodoxy. Placing heart over religion, Alix relented, at which time they both broke down in tears. A week after the funeral of Alexander, Nicholas married the newly minted Grand Duchess Alexandra Feodorovna; in private, they referred to one another as Nicky and Alicky. They exchanged vows in the Grand Church of the Winter Palace where the bride’s white dress was so encrusted with jewels she required assistance to kneel or stand. 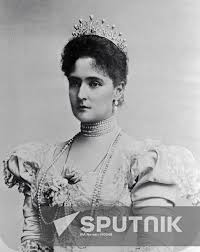 Nicholas’ popularity plummeted with his country’s disastrous defeat in the Russian- Japanese War, along with the Bloody Sunday massacre where imperial troops gunned down unarmed workers. Resistance against the tsar escalated; under duress, he accepted the Duma, an elected parliament founded on a constitution.

Ineffectual at running a country, Nicholas proved a devoted family man. Insulated in Tsarkoye, the royal couple welcomed a succession of four daughters: the Grand Duchesses Olga, Tatiana, Maria, and Anastasia. In their isolated palace, the four sisters formed an unshakable bond and referred to themselves as the OTMA derived from the first letter of their respective names. The Tsarina’s Mauve Room was her favorite retreat, so named as everything in the room was the shade of a branch of lilac Nicholas had once gifted Alexandra. They were over the moon at the birth of Alexei Nikolaevich, the vortex of his close-knit family. Elation transformed to agony when the infant Tsarevitch bled from his navel: he had inherited his great-grandmother’s hemophiliac gene.

As the years went by, with prayer and physicians unable to treat Alexei, the desperate mother turned to the peasant holy man, Grigori Rasputin, rumored to possess healing powers. His mysterious ability to help counter Alexei’s bleeding episodes granted him prominence in the royal inner circle. Resentment mounted as “the mad-monk” rampaged throughout the court with the restraint of a raging bull, engaging in drunken escapades with prostitutes. The Tsar, powerless when it came to his wife, remarked, “Better ten Rasputins than one of the empress’s hysterical fits.” The nobles were infuriated that the peasant had usurped their power, and the rest of the country-oblivious to the Crown Prince’s condition- were appalled their ruler revered a sinner as a saint.

Nicholas’ prestige further eroded during World War I when he left Petrograd to assume command of the army at the front, (in his pocket he carried his wife’s photograph), thereby leaving Alexandra-and Rasputin-in charge. The situation provoked fury as many felt the German-born Tsarina secretly sided with Kaiser Wilhelm II, her second cousin. Postcards proliferated with images of the Tsarina and Rasputin in sexual poses. The Russian version of a Greek tragedy continued when the aristocrat, Felix Yusupov, along with his co-conspirators, arranged the assassination of Rasputin as “an act of patriotism” carried out to save Russia from ruin. Due to his prodigious strength, Rasputin only succumbed after being poisoned, clubbed, shot, and drowned. Nicholas’ mother was thrilled at his murder while Alix feared her adored Alexei had lost his hope of staving off hemophilia.

In 1917, with Russia splitting apart at the seams from loss of life incurred during the war, with strikes resulting from severe food, housing, and fuel shortages, at midnight Tsar Nicholas abdicated his throne for both himself and Grand Duke Alexei. To compound the humiliation of letting his birthright slip through his fingers, the man who had wielded absolute power was a prisoner at the mercy of vengeful revolutionaries.

After five months of palace arrest in Tsarskoe Selo, the Bolsheviks ordered the Romanovs relocated first to Tobolsk in Siberia, then to the Ipatiev House in Yekaterinburg, in the foothills of the central Urals. While the tsar and the children were polite to their captors, Alexandra treated them with haughty disdain. However, her aloofness might have stemmed from unimaginable grief. Her family, who she loved above all else, was in shambles: her Nicky was inconsolable that he had placed his loved ones in danger; her daughters sported shaved heads, a result of measles; Alexei was confined to a wheelchair. Shrieks in the night from the girls resulted from sexual molestation by their captors. The only light in the literal gloom-their windows of their prison had been painted black-is the family remained together, and the prayer the counter-revolutionary White Army would come to their rescue.

On midnight, July 16th, 1918, after seventy-eights days of captivity, Yakov Yurovsky, awakened the Romanovs and ordered them to dress in preparation for relocation as the White Army was advancing. Guards escorted them to the cellar of the home where Nicholas sat with his arm around Alexandra, Alexei on his lap. As they waited, a 12-man execution squad barged into the room, holding revolvers. Yurovsky stated, “Your relations have tried to save you. They have failed, and we must now shoot you.” Nicholas rose from his chair to shield his wife and son. The deposed Tsar met his end with a bullet to his head. Alexandra started to make the sign of the cross before she fell in a bloodied heap. The terrified OTMA survived the first barrage of bullets as their dresses held precious jewels sewn underneath their garments. Diamond-filled corsets made killing them with bayonets a difficult task.

Indignity continued postmortem: The assassins loaded the corpses, (including three servants and the family physician), onto trucks, drove them to an abandoned mine shaft in the forest, hacked the bodies into pieces, and doused them with sulfuric acid before burial in a family grave. With the discovery of their remains, Russia canonized the family as martyrs, and laid them to rest, amidst great ceremony, in the Romanov crypt in Saint Petersburg, eighty years after their assassination.

The love story of Nicky and Alicky had brought ruination to their family and empire, an ironic contrast to the words Alexandra had written in her diary on her wedding night, “At last united, bound for life and when this life is ended, we meet again in the other world and remain together for eternity. Yours, yours.”