Those who wear the tiara capture the popular imagination, as queens exist in an emerald city of gowns, palaces, and jewels, oh my! And when a royal alters the course of world history, the dust never settles on their stories.

Except for the general from Corsica, Napoleon Bonaparte, no other outsider outstayed his or her French welcome more than a Viennese princess. The lady whose life turned fractured fairy tale was the Habsburg princess, Maria Antonia Josepha Joanna, remembered by her French name, Marie Antoinette. Her mother- the eighteenth century “momager”- was the Empress Maria Theresa who regarded her sixteen children as pawns on the European chessboard. At age ten, Maria Theresa pledged Marie Antoinette to the eleven-year-old grandson of French monarch, Louis XV, in order to cement the Habsburg and Bourbon dynasties. Marie Antoinette, the seventh and youngest archduchess, served as the chosen one as her older sisters had already been the brides of other European rulers or had perished from smallpox.

At age fourteen, Marie Antoinette experienced the trauma of leaving her cossetted cocoon for a court hostile to Austria, its traditional enemy for centuries. Maria Theresa’s parting words, “Do so much good to the French people that they can say that I have sent them an angel.” In a display of the might and majesty of her Empire, Austria sent off its princess with a procession of fifty-seven coaches, 376 horses, 132 dignitaries, and an assortment of doctors, hairdressers, cooks, bakers, blacksmiths, and a dressmaker. Upon her arrival, the French forced Marie Antoinette to relinquish her nationality along with her personal possessions-including her beloved pug, Mops. The archetypal poor little girl’s destiny was to be prisoner as much as she was princess.

Louis Auguste de Bourbon and his child bride married two days after their first meeting in the chapel at the Palace of Versailles. Four years later, before Louis’ grandfather succumbed to smallpox, he pronounced, “Après moi, le déluge,” “After me, the deluge.” The Dauphin became King Louis XVI in a coronation at the cathedral in Rheims, and his newly appointed queen wrote to her mother, “Protect us, Lord, we are too young to reign!” In addition to the weight of her crown, there was trouble in the boudoir. The socially inept, heavyset groom was not to deflower his wife-or, at least, finish the job-until seven years later. The lack of intimacy distressed Marie Antoinette who dropped hints about “living in intimacy,” a tenet of their vows. Maria Theresa, after encouraging her daughter to “lavish more caresses” on her husband, dispatched her son, Emperor Joseph of Austria, to “stir up this indolent spouse.” Once Louis got the hang of it, he fathered Marie Therese, Louis Joseph, Louis-Charles, and Sophie. A doting mother, Marie Antoinette’s most treasured moments were spent with her children at Petit Trianon, a chateau on the royal grounds that had been built by Louis XV for his mistress, Madame de Pompadour. Unlike most members of the court who had always viewed the foreign royal as L’Autrichienne (a play on the word Austrian and bitch) Princesse de Lamballe befriended the queen.

While Maria Theresa was a workaholic consumed with matters of state, Marie Antoinette sought diversion in opera, theater, and gambling. As she admitted to her trusted adviser, Austrian ambassador Florimond Claude, comte de Mercy-Argenteau, “I am terrified of being bored.” Keeping boredom at bay involved outlandish spending: a pair of her diamond bracelets cost as much as a Paris mansion. Dressed for excess, Marie Antoinette lavished over $3,000,000 a year on her jewel-encrusted gowns. While Louis never took a mistress, Marie Antoinette dressed like one, something that did not sit well with a country used to the wives of Louis XIV and Louis XV, unobtrusive baby-makers. Informed of her daughter’s extravagant lifestyle, Maria Theresa fired off a letter, “You lead a dissipated life. I hope I shall not live to see the disaster that is likely to ensue.”

Ensconced in the gilded cage of her palaces in Versailles and the Château de Fontainebleau, Marie Antoinette was oblivious to the plight of the poor. A failed harvest made the price of grain the highest in a century, and the populace were far from impressed that the queen used precious flour in her elaborate pompadours. The rumor mill circulated that in response to the people’s demand for bread, she scoffed, “Qu’ils mangent de la brioche” “Let them eat cake.” France’s financial woes led to her nickname, Madame Deficit; the country blamed her that it was on the brink of bankruptcy. As Maria Theresa had predicted, her daughter was “hurtling toward an abyss.” If serving as the bullseye of hate was not difficult enough, Marie Antoinette became a bereaved mother at the death of her nine-year-old son, Louis Joseph, who had succumbed to tuberculosis of the spine. The passing of her daughter, Sophie, before her first birthday, had preceded his loss.

The start of the revolution that signaled the death knell of the House of Bourbon was the 1789 storming of the Bastille prison, a symbol of royal tyranny. Marie Antoinette tried to convince her husband to put down the insurrection; however, a French Hamlet, he was too indecisive to act, thereby handing over Paris to the revolutionaries. Honoré-Gabriel Riqueti, comte de Mirabeau, wryly observed that the queen was “the only man at court.”

Three months later, a mob of some 7,000 women, armed with spikes and sickles, marched on Versailles where they entered the queen’s private quarters and vented their fury by smashing her mirrors and ripping her bed to shreds. Outside Marie Antoinette’s window, someone waved a spike that held the decapitated head of Princesse de Lamballe. The enemies of the crown escorted the family to the Tuileries Palace where National Guardsmen held them captive. To placate the people, Marie Antoinette took to wearing the patriotic tricolor garb. Count Fersen, a Swedish count purported to be Marie Antoinette’s grand passion, arranged their escape in a coach; however, recognized in Varennes, the revolutionaries captured the Bourbons and returned them to Paris where they were met with a hostile crowd. After a reprieve, the militants imprisoned the royals in the Temple tower, a forbidding fourteenth century fortress founded by the Knight Templars. In a nod to while Rome burned Nero fiddled, Marie Antoinette continued to wear her stylish outfits while in captivity. For the next two months, the authorities left the family alone; the interlude ended when guards locked up the former king on a different floor and put him on trial. The militant Maximilien Robespierre sealed the dethroned king’s fate, “Louis must die, so that the country may live.” A court condemned Louis to the guillotine where a mob estimated at 20,000 looked on.

Six months later, the new leaders of France arrived to transfer the widow Capet, (Maria Antoinette’s new title, so named after the medieval dynasty), to the Conciergerie, located on the River Seine, a dank prison dubbed “death’s antechamber.”  The eight-year-old Louis Charles (Louis XVII to royalists) clung to her skirts until guards pried him off. His captors plied the child with alcohol between beatings and taught him to sing the “Marseillaise,” while forcing him to wear the red hat of a sans-culotte. Two years later, the child passed away, ill and alone, in his dungeon cell. 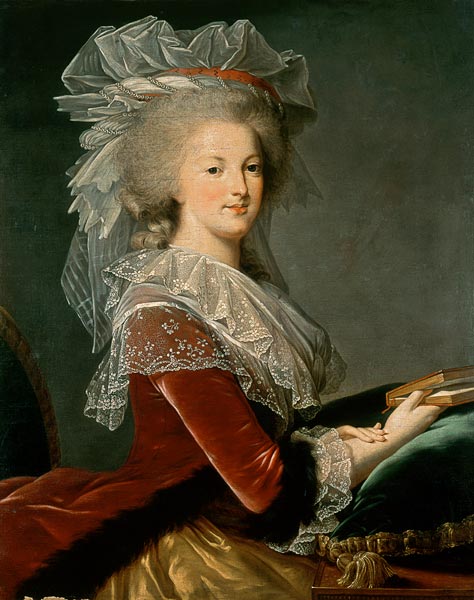 In The Tragedy of Macbeth, Shakespeare wrote of the Thane of Cawdor, “Nothing in his life/Became him like the leaving it.” In the same vein, Marie Antoinette’s suffering gave her the backbone she had always lacked as the Princess of Austria, as the Queen of France. In a letter, she wrote after her failed escape from detention in Paris, “Tribulation first makes one realize what one is.”

At her trial for treason, Marie Antoinette, emaciated and visibly aged, maintained her composure during the thirty-two-hour ordeal. The most shocking accusation against the former royal was when the prosecution presented the trumped-up testimony of Louis-Charles that he had sex with his mother. Outraged, Marie Antoinette responded, “Nature refuses to answer such a charge brought against a mother. I appeal in this matter to all the mothers present in court.” The trial was a foregone conclusion, and the new government pronounced a sentence of death. On the eve of execution, Marie Antoinette wrote to her sister-in-law asking her to persuade Louis-Charles to never seek revenge, and ended her letter, “I am calm as people who are whose conscience is clear.”

At dawn, Citizen Sanson, the head executioner, cut off her hair that had turned white with her agony. When a priest told her to have courage, she told him, “Courage? The moment when my ills are going to end is not the moment when courage is going to fail me.” A cart carried the condemned woman to the Place de la Révolution; onlookers spit and hurtled insults as she drove by, yet she maintained her regal bearing throughout the ordeal of her execution. The words of Charles Dickens in A Tale of Two Cities apply to the last queen of France, “it is a far better rest that I go to than I have ever known.”