Crowned heads usually walk the prescribed path of sumptuous palaces, eye-popping jewelry, envy-worthy travels. A royal woman took this road, but along the way, her life also intertwined with Count Dracula, a Dorothy Parker poem, a revolution-and that was merely the tip of the proverbial iceberg.

In 1938, Romania’s dowager, Queen Marie, lay in state while 250,000 people gathered to pay their final respects. The scene of her funeral was as colorful as her biography: red flowers surrounded her body, lavender flags wafted from windows. Among the mourners were her children: Romania’s King Carol II, Greece’s ex-Queen Elizabeth, and Yugoslavia’s Queen Mother Marie. The air vibrated with the strains of Wagner’s “Götterdämmerung,” compliments of The Bucharest Symphony.

Except for Dorothy Parker’s 1937 poem, few people are familiar with the former Romanian ruler: “Oh, life is a glorious cycle of song/A medley of extemporanea/And love is a thing that will never go wrong/And I am Marie of Romania.” The queen to whom Ms. Parker alluded was Princess Marie Alexandra Victoria, (Missy to her family). She was the granddaughter of England’s Queen Victoria and of Russia’s Czar Alexander II, and as such, her family ruled almost half the world. Her parents were Prince Alfred, Duke of Edinburgh and Grand Duchess Maria Alexandrovna. Marie and her three siblings spent their childhood in Eastwell Park in Kent, Clarence House in London, and Osborne Cottage on the Isle of Wight. On visits to Windsor Castle, they met with Queen Victoria who Marie later referred to as her “wonderful little old Grandmamma.” 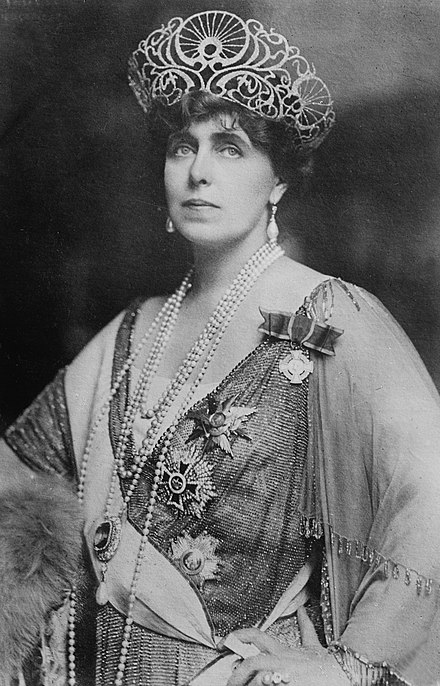 As Marie was ninth in line to the throne, there was little chance she would wield the scepter; instead, the expectation was she would wed a fellow blueblood. The possibility presented itself when George, the Prince of Wales, and the future King Edward VII, proposed. However, Marie’s mother vetoed his request as her childhood Russian orthodox religion prohibited marriage between first cousins. Another early suitor was Winston Churchill, not a viable match as he was not the possessor of royal blood.

The Duke and Duchess of Edinburgh had not originally sought an alliance with the Romanian throne. At the time of Marie’s birth, the Balkan nation would not become a kingdom for six years; only in 1881, the German Prince Charles of Hohenzolleren-Sigmaringen became its King Carol I. However, when the king’s nephew and heir, Ferdinand, was in quest of a wife, Marie’s mother agreed to a match although Ferdinand was a decade older than her seventeen-year-old daughter, Marie had only met him a few times, and he was a Catholic. Along with her trousseau, the teenager might have considered packing a crucifix and garlic. The gothic writers of the era depicted the forests of the Carpathians as the haunt of vampires that Bram Stoker immortalized four years later in Dracula.

In 1893, Ferdinand and Marie wed in a lavish ceremony at Schloss Sigmaringen overlooking the Danube River in the castle that belonged to the groom’s father, Prince Leopold. In the presence of assembled royals, Kaiser Wilhelm II signed the marriage contract. The bride’s jewelry consisted of a 478.68 carat blue sapphire pendant that matched her sapphire tiara.

The first few months in Budapest were challenging, as Marie was homesick and endured marital and in-law problems. When she discovered she was pregnant, Marie had to petition the court for doctors to administer chloroform to help with the labor as Romanian medics believed that “women must pay in agony for the sins of Eve.” The couple went on to have six children as well as his and hers affairs. Some of Marie’s greatest romances were with Barbo Stirbey, head of the Romanian royal household, the American Waldorf Astor, the future husband of Nancy Astor, and Colonel Joseph Boyle, a Canadian soldier of fortune.

At the onset of her reign, Marie was self-engrossed; a member of her family discovered a piece of paper in her palace on which were the words, “Marie of Roumania-one of the most wonderful women in the world. A woman like that is born once in a century.” The handwriting belonged to the queen. However, Romania’s political turmoil turned the pampered princess into a warrior queen. In her case, the times made the woman.

Her transformation started in the field hospitals of the 1913 Second Balkan War where thousands of soldiers perished from cholera and typhus. Rather than remain in the refuge of her palace, Marie left for the front to work as a nurse for the Romanian Red Cross where she dressed in a shapeless, white, nun-like garment. She held the hands of dying men, prayed with them, and handed out sweetened tea, all the while refusing to wear a mask. Covering her face, she explained, would dehumanize the men’s final moments. When an aide suggested she at least wear gloves, the Queen retorted, “I really can’t ask them to kiss Indian rubber.” A prolific wordsmith, she wrote of the war years, “The remembrance I keep of those days is of a suffering so great that it almost blinded me. Yet I was quite calm and continued living and working as though my head had not been torn from my breast.” Photographs of Marie kneeling in mud and feces endeared the Romanians to the British born royal.

In 1916, the day Romania entered World War I on the side of Britain, France, and Russia, Queen Marie wrote in her diary, “What can a woman do in a modern war? It is no more the time of Joan of Arc?” Within three months, enemy troops had taken over Budapest that necessitated the flight of King Ferdinand and Marie to the north. A year later, despite the opposition of the royal couple, Romania’s politicians had signed a peace treaty with their former enemies.

In 1919, Marie descended on Paris where the Allied Powers had convened to divvy up empires and redraw the map of Europe. Along with King Albert of Belgium, she arrived in order “to urge the claims of their small countries.” Romania’s fear was the victorious powers would decrease its borders in retaliation for it having signed a peace treaty with the Germans. She stayed in a suite of twenty rooms at the Ritz saying “I feel this is no time to economize,” and, not one to pass up French fashion, Marie purchased thirty-one coats, sixty gowns, eighty-three pairs of shoes, twenty-two fur wraps, and twenty-nine hats. The queen’s political agenda was her warning that unless her kingdom received fair treatment, it would embrace Bolshevism. Her ploy was well-played: under the Treaty of Versailles, Romania doubled in size and became the fifth largest nation in Europe whose population rose from eight to eighteen million. Deflecting from her success, Marie stated, “One woman’s word cannot change the face of such big events.” A British official deferred and described her as “the most astonishing propagandist” he had ever seen.  Another observer noted, “I know of no one who went away from Paris with more satisfactory annexations than Marie of Romania.”

In tribute to the queen, the citizens of Brasov gifted her Bran Castle, a Transylvania fortress in the Carpathian Mountains that Teutonic knights erected in 1212. The castle carried a certain cache as two centuries later it served as residence of Vlad the Impaler, known as the toothy Dracula.

Although Ferdinand and Marie had assumed the crown in 1914 after the passing of the childless King Carol I, because of World War I their coronation had been postponed until 1922. The ceremony was held at the cathedral of Alba Iulia, once a Middle Ages fortress. The new queen dazzled in a 1913, 478.68 carat Cartier sapphire pendant necklace that completed her Russian sapphire tiara. Enthusiastic crowds chanted, “Regina Maria!”

In 1938, Queen Marie passed away in Pelisor Castle; mourners transported her to Bucharest where she lay in state in the Cotroceni Palace’s white drawing room. Her internment was at the Curtea de Arges Monastery; however, in accordance with her will, her heart, enshrined in a small, gold box, came to rest in the Stella Maris Chapel in Balchik, in the castle that had been her favorite summer residence. During World War II, when the area became part of Bulgaria, her family relocated her heart to Bran Castle. After the Iron Curtain descended on Romania, the new regime seized Bran and deposited the organ in a storage room in the National Museum of Romanian history. After seventy years, Marie’s children arranged for her heart, ensconced in a silver box, and attended by eight soldiers on horseback, to be placed behind the couch in Pelisor Castle where she had passed away. The procession from the museum to the castle was accompanied by hundreds of people including dignitaries, onlookers in traditional attire, and the queen’s descendants who had returned to Romania for the occasion. Onlookers waved flags accompanied by the strains of the Romanian and British national anthems.

Had Marie’s destiny been to marry King George V she would have had a far staider life, one that would no doubt have left her restless. The queen would well have understood Dorothy Parker’s words, “They sicken of the calm, who know the storm.”