What do Balmoral Castle, Sandringham House, Windsor Castle, Clarence House, St. James Palace, Kensington Palace, Frogmore Castle, Highgrove House, Palace of Holyroodhouse have in common? They are all stately pleasure domes of the Britain’s royal family. However, the crown jewel of their portfolio is Buckingham Palace, so named after The Duke of Buckingham.

For a monarchy that can trace its lineage for a millennium, Buckingham Palace is a relatively new royal residence. The castle, situated in Westminster, a London borough, began as marshland nestled against the River Tyburn. Various owners included William the Conqueror and the monks of Westminster Abbey. In 1698, John Sheffield, the First Duke of Buckingham, acquired the property that he called Buckingham House, where he resided with his third wife, Catherine, Countess of Anglesey, the daughter of King James II, and their four children: Sophia, John, Henrietta Maria, and Robert. His three illegitimate offspring were not part of his household. 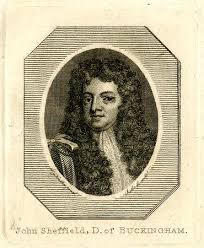 John was born in 1647, the only son of Edmund Sheffield, the Earl of Mulgrave, (one of Oliver Cromwell’s councilors), and Elizabeth. At age eighteen, he joined the navy where he participated in the Anglo-Dutch Wars. A man of letters, John was friends with Alexander Pope and John Dryden, to whom he erected a monument in Poets’ Corner, Westminster Abbey. Dr. Johnson included him in his work Lives of the Poets. A quotation from the Duke’s writing, “’Tis the most tender part of love, each other to forgive.” He served as the gentleman of the bedchamber of Charles II but fell out of favor after courting the king’s daughter, Princess Anne. John passed away at Buckingham House in 1721; after his son’s death, the family title became extinct. A large marble monument in his memory resides in Westminster Abbey. Adorning his sarcophagus is the life-size sculpture of the duke, dressed in Roman armor, reclining on a mattress alongside that of his widow.

In 1792, George III bought the property for his wife, Queen Charlotte, thereby earning it the nickname, The Queen’s House. In her stately residence, she birthed fourteen of her fifteen children. With the ascension of George IV to the throne, he aspired to transform the structure into the official residence of the monarchy. However, the first monarch to move into Buckingham Palace was Queen Victoria. Her husband, Prince Albert, ordered the erection of a central balcony, the most iconic since Juliet’s. Key events from the palace’s balcony: Queen Victoria waved farewell to her troops as they departed for the Crimean War; Londoners engaged in thunderous applause when newlyweds, the Duke and Duchess of Cambridge, exchanged a kiss; the eyes of the world are drawn to it during the Trooping of the Colour. Not immune to tragedy, during the Blitz, Nazi bombs damaged the royal target. The site was the mecca for international grief when Princess Diana’s admirers left endless mementoes at the palace’s black, wrought-iron gate.

Through extensive renovations, Buckingham Palace covers 830,000 square feet and holds 775 rooms, 78 bathrooms, a swimming pool, cinema, and ATM. The Queen’s Gallery includes masterpieces by Rubens, Vermeer, and Rembrandt. As the seat of the world’s most famous family, 15 million tourists visit the palace annually.

The national treasure that Forbes values at £3.6 billion has survived two world wars, an abdication, and endless scandals. The palace became the focal point of world-wide mourning with the passing of Queen Elizabeth II. With her loss, a hopeful Commonwealth looks with hopeful eyes towards the changing of the guard.
Prev Next