The British national anthem ends with the words, “Long to reign over us/God save the Queen.” A princess never had the opportunity to sit on the throne, and yet forever rules as an immortal icon.

In Greek mythology, Diana was the goddess of the hunt; ironically, she shared her name with the world’s most hunted. The girl who would be queen began her storied life as Diana Frances Spencer in Park House, on the Queen’s royal estate of Sandringham, Norfolk. Her father, Edward John Spencer, Viscount Althorp, was a descendant of King Henry VII; her mother, Frances Ruth Burke Roche, was the child of the fourth Baron Fermoy. Her parents were disappointed at the birth of a third daughter; they wanted a son to carry on the four-century old Spencer name. Three years later, they rejoiced at the arrival of their son, Charles. As members of the upper English crust, play dates were with Prince Andrew and Prince Edward.

Blue blood and wealth were not armor against family troubles: after fourteen years of marriage, Frances was the “other woman” in wallpaper heir Peter Shand Kydd’s divorce that led to her own. To add to the drama, Diana’s maternal grandmother, Lady Fermoy, sided with her son-in-law. When the six-year-old Diana fell from a horse while staying with her mother, the court awarded custody of the siblings to the Viscount. A lifelong memory was the crunch of gravel as her mother left Althorp, of her and her brother crying themselves to sleep. 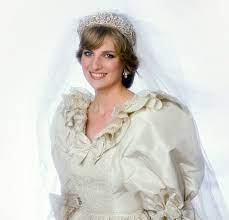 Upon the 1975 passing of her grandfather, Charles became Viscount Althorp, his three sisters received the title of Lady. The Spencers relocated to Althorp, the ancestral seat in Northamptonshire, situated on 1,500 acres of forest and meadows on whose walls hung paintings by old masters, and priceless antiques adorned the home. Two years later, her father  married Raine, Countess of Dartmouth, the daughter of romantic novelist Barbara Cartland. His four children resented their stepmother and christened her “Acid Raine.”

Diana’s education ended at age sixteen at a finishing school in Switzerland where she learned how to ski. On her eighteenth birthday, equipped with family funds, Diana purchased a flat in London and worked as an assistant at the Young England Kindergarten.

The heir to the British throne became interested in Diana in 1977 at a grouse shooting party; at the time, he was romantically involved with Lady Sarah, Diana’s sister. When Sarah admitted she would not marry the prince “if he were the dustman or the King of England,” Charles’ response was  that she had done something incredibly stupid. While Diana recalled her first impression of Charles was, “God what a sad man,” he waxed effusive, “I remember thinking what a very jolly and amusing and attractive 16-year-old she was. I mean, great fun, and bouncy and full of life and everything.” Three years later, they reconnected at a weekend barbeque at the home of Philip de Pass’s house in Sussex. After expressing empathy over the assassination of his uncle, Lord Mountbatten, Diana claimed he was all over her and followed her around like a puppy.

The press was hungry for any news of the pre-school teacher, the love interest of the heir to the British throne. Reporters besieged the teenager who had been so shy she had only taken nonspeaking parts in school plays. On one occasion, surprised by photographers as she sat at the wheel of her red Mini Metro, she burst into tears. She stated, “I know it’s just a job they have to do, but sometimes I do wish they wouldn’t.”

Thirteen dates later, Charles popped the question over a private dinner in his third-floor apartment in Buckingham Palace, just before Diana departed for an Australian vacation. He stated, “I wanted to give her a chance to think about it-to think if it was all going to be too awful.” Diana quickly interjected that she would never have entertained any doubts. The Prince of Wales sealed the deal with a twelve-carat Sri Lanka engagement ring surrounded by fourteen white diamonds. Amidst the excitement, an unsettling incident sent off an alarm bell. Asked by a reporter if they were in love, Diana gushed, “Yes, of course we are.” The prince responded, “Whatever love is.” Diana said the remark traumatized her and increased pre-nuptial jitters. Her sisters told her she could not back out as the souvenir tea towels were already on sale.

The 1981 marriage focused on the nineteen-year-old blushing bride who wore a voluminous gown with puffy sleeves and a twenty-five-foot-long train. Hidden in its depths was a golden horseshoe, studded with diamonds. The wedding took place at St. Paul’s Cathedral in a scene that was an ode to pageantry. In attendance were Europe’s crowned heads and dignitaries such as President Mitterrand of France, First Lady Nancy Reagan, and the King of Tonga. Along with the 2,700 guests, a television audience of 750 million watched from around the world. The Prince and Princess of Wales sailed off to their Mediterranean honeymoon aboard the royal yacht Britannia.

The couple‘s first child was Prince William, “Wills,” and their second was Prince Harry. Diana found her fashion niche and her dazzling outfits added to her aura of glamor. On her first outing with Charles, she arrived in a décolleté black taffeta dress that caused the octogenarian Lady Diana Cooper to quip, “Wasn’t that a mighty feast to set before the king?” The public’s taste for the breath-taking princess proved insatiable. On a visit to Canada, there was an outbreak of “Di-mania;” in Norway, the country dubbed her “The Snow Princess,” during a White House visit the Princess electrified as she danced with John Travolta to the Grease song, “You’re the One that I Want.”

Although the princess captivated the public, her popularity cast her husband in a supporting role, one he found off-putting. After delivering a speech on a serious issue, Charles fumed when the news only reported on his wife’s outfit. In addition, Diana captivated hearts when she crossed royal protocol by gestures such as kissing a child in a crowd. In contrast, the Prince of Wales, who seemed not to have a non-serious bone in his body, was perceived as aloof and eccentric. Their union proved the falsity of the saying “opposites attract.” Charles loved horses, gardening, and architecture; Diana loved fashion, pop music, and dancing. Photographs began to appear that captured the couple with faces that mirrored masks of misery. A variation of the song from Grease seemed applicable, “You’re the one I don’t want.”

Another reason the marriage turned unto an unhappily ever after was because Charles had resumed his affair with Camilla Parker Bowles, the woman with whom he shared the commonalities of age and interests. At a party, Diana confronted Camilla, (who she referred to as the rottweiler), about their affair. Camilla responded, “You’ve got all the men in the world falling in love with you. What more could you want?” Diana’s answer: “I want my husband.”

The fissure in the royal relationship became manifest on their 1992 trip to Europe where a photograph showed a forlorn princess sitting alone in front of the Taj Mahal, the shrine to a husband’s conjugal devotion. Visiting Korea soon after, the press dubbed the Prince and Princess of Wales “The Glums.”  The public release of the phone call between the princess and his mistress fanned the flames of marital tension.  After Charles admitted to his adultery in a television interview, Diana, whose clothes were indicators of her emotional weathervane, wore what became known as her “revenge dress,” a form-fitting black, off-the-shoulder dress. The following year, in a nod to what’s good for the prince is good for the princess, Diana appeared on a BBC episode to air her own grievances. Referencing the other woman, Diana stated, “there were three of us in this marriage, so it was a bit crowded.” In 1996, the fractured fairy tale ended when Queen Elizabeth II sanctioned the divorce, thus ending the War of the Wales. Diana was no longer to be addressed as Her Royal Highness, though she kept the title of the Princess of Wales. As part of the settlement, she received $22.5 million, an annual payment of $4,600,000, and kept her five-bedroom apartment in Kensington Palace.

Diana had often compared herself to another blond and glamorous icon, Marilyn Monroe. She related to the star as both were haunted and hunted. In a nod to tragic irony, the princess and the starlet both passed away at age thirty-six. Diana was in Paris with her boyfriend, Emad Mohammed-al-Fayed, nicknamed Dodi, where they were staying after cruising the Mediterranean on his father’s yacht. In an attempt to outrace the paparazzi, Henri Paul, the chauffeur of their black Mercedes, crashed into the Pont de l’Alma tunnel. So great was the outcry of the death of the princess that people forever remember the moment they learned of her 1997 tragic end.

Six weeks earlier, Elton John and Diana had consoled one another at the Milan funeral of their mutual friend, murder victim Gianni Versace. When the royal family asked Elton to perform as part of her Westminster Abbey eulogy, he chose a song that had originally been a tribute for Marilyn. He altered its opening life from, “Goodbye, Norma Jean,” to “Goodbye, England’s rose.”