The name “Ford” conjures the product which rolls off Detroit’s assembly lines, the Californian addiction center, the Omaha-born American president. However, there was a Ford whose bouffant hair and prim exterior belied an interior far from docile. Despite whatever storm in which she was at the center, she was always Gerald’s first lady.

While Germaine Greer spear-headed the Women’s Liberation Movement another who contributed to its fight, (though no burning bras were involved,) was a free spirit from the start. Elizabeth Ann Bloomer was born on April 8, 1918, in Chicago, but raised in Grand Rapids, Michigan. Her two brothers were considerably older; as her mother phrased it, Betty “popped out of a bottle of champagne.” As a child she was so overweight Mrs. Bloomer hung a sign on her back: PLEASE DO NOT FEED THIS CHILD. Her idyllic youth was shattered upon her father’s accidental death from carbon monoxide poisoning while repairing his car. As an outlet she took to dance and her talent was such that at age twenty she was offered tuition by idol Martha Graham. Ecstatic, she relocated to Greenwich Village where she mixed with liberal artists who helped form the broad-minded views which were to become her trademark. Although she performed at Carnegie Hall, she was devastated when she failed to secure a permanent placement in the famed troupe. 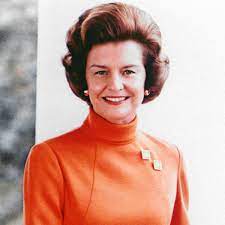 Within a year Betty Bloomer married an old school sweetheart, William Warren, who, like her father, was a travelling salesman. When she realized life was better when he traveled,, she decided to part ways. However, she stayed to support her husband during his two-year near-fatal medical ordeal. Thrust into the role of bread-winner, (she worked on a production line in a frozen food factory,) she honed her passion for women’s equality when she experienced gender discrimination in the workplace. After five years, when Warren recovered, liberation followed. Betty eschewed alimony, feeling it unjust to take from a man one no longer loved.

Through a mutual friend Betty met, as she stated in memoir, The Times of My Life, “probably the most eligible bachelor in Grand Rapids,” the one she wanted to dance with for the rest of her days. She said of Gerald Ford’s 1948 proposal, “He’s a very shy man and he really didn’t tell me he loved me. He just told me he’d like to marry me-I took him up on it immediately.”

He seemed a relief after alcoholic Warren. But she was to discover Jerry too had a secret vice-a monomania of all things political. He was concerned his marriage to a divorced ex-dancer would alienate voters; however, love triumphed and the nuptials took place on October 15, 1948, at Grace Episcopal Church. Betty looked ravishing while Gerald walked the aisle in dusty brown shoes that did not match his suit. The ceremony had been scheduled for a Friday so that the groom’s plans to go to a Northwestern-Michigan football game the following day would not be interrupted. (He had played center for Michigan.) He made a late appearance-not from cold feet-but because he was out campaigning. They spent their two day honeymoon in Ann Arbor attending Republican Party rallies.

Two weeks after she became Mrs. Ford, Jerry was elected to Congress and they relocated to the capital for a two-year stay, which stretched to twenty-eight years. She settled into the time-honored role of a Washington wife, and became the mother of three sons, (Michael, John, Steven) and daughter, Susan Elizabeth.  As spouse of an up and coming politician and mother of four, Betty’s life appeared cut from the cloth of a 1950s sitcom,-but there were cracks. She had long, lonely periods when her husband was absent working with his congressional district in Michigan which cast her in the role of single mother. In addition, she felt inferior to the Washington wives who carried a B.A. after their name while she only carried a MRS before her own. Nevertheless, she threw herself into her role and while her husband was absent with leave she spent the early years tripping over bags of marbles, burying pet alligators, visiting the emergency room, and measuring out life in Pablum spoons. But by 1965, she could be the Bionic woman no longer, and began to take comfort in the bottle and with pain-killers.

Shakespeare wrote in Twelfth Night, “Some are born great, some achieve greatness and some have greatness thrust upon them.” Betty always believed this to be true of her husband, but events in American history were to push her private sentiment onto the world stage. In 1973, when Vice-President Spiro Agnew was removed from office after he pled no contest to tax evasion, Nixon filled the vacancy with the appointment of Gerald Ford. The move was as great a shock to Betty as to the rest of the country. She was embarking on unchartered waters but knew she did not want to sail in the same direction as predecessor Judy Agnew, also the mother of four. The ousted Second Lady had stated, “I don’t take stands on anything. I stay out of the political end of it. When people ask me what I majored in, I proudly tell them, ‘I majored in marriage.’”  Betty may very well have felt the same.

Less than a year later, with Nixon’s own resignation from the Watergate scandal, Gerald Ford was sworn-in as the only chief executive in American history who had not been elected either as Vice-President or President. During the Inaugural Address, Betty held the Bible on which Gerald laid his hand to repeat the Presidential Oath. Ford said in his first public words he was “indebted to no man and only to one woman.”  Wearing a simple blue dress Betty remained silent; her Living Bible decreed, “Put a muzzle on your mouth.”

While Ford’s task was clear-to heal a nation torn asunder by Vietnam and Watergate-for his First Lady, the waters were far murkier. Within twenty-four hours, the erstwhile housewife found herself as hostess at a state banquet for King Hussein of Jordan. She said, “I was an ordinary woman who was called on stage at an extraordinary time. I was no different once I became First Lady than I had been before. But, through an accident of history, I had become interesting to people.” And interesting she proved.

In the White House Betty tried out disco steps, and shimmied to the Bump at dinner dances. On a trip to China with her husband, she enchanted by kicking off her shoes and dancing in her stocking feet at a Beijing school. She also provided a field day for the press when she uttered the most un-lady-like comments in First Lady history. On “60 Minutes” in 1975, her bouffant hair perfectly coiffed, she declared that smoking marijuana was like “having a first beer.” When questioned how she would react if she discovered her teen aged daughter was having an affair: “Not surprised.” Her response to r how often the President and she had sex: “As often as possible.” Jerry’s reaction, “Honey, you just lost me twenty million votes.” She was also open about the fact the Fords not only shared a bedroom but they even had the section separating the First Lady’s and President’s compartments on Air Force One torn down. Presidential advisors suggested the President rein in his outspoken spouse, but he declined, commenting she was fully entitled to her own views. Critics, however, were aghast and one wrote, “The First Lady-no lady.”

Betty brought a relaxed touch to her stately address. After she had moved in, she inquired why the staff never returned a greeting and was informed Richard and Pat Nixon had preferred they take a stance of silence. Under Gerald and Betty, the President and the butler compared golf scores and the staff were treated like members of their extended family. Betty eschewed formality and insisted she never be call Mrs. Ford-she would only answer to Betty. In another instance of a light-hearted White House, when Gerald remarked she was too thin, she borrowed a skeleton from a hospital, dressed it in her hat and coat and sat it in a bedroom chair.

First Ladies have to choose their battles, and Betty’s foremost one was equal rights for women. It is not known whether she employed the strategies of Lysistrata who organized the women of ancient Greece to withhold sex until they ended the Peloponnesian War, but she was successful in getting her husband to appoint a woman as ambassador to Britain. She also persuaded her husband to bestow on Martha Graham the Medal of Freedom. Still, even pillow talk did not succeed in the appointment of a female to the Supreme Court nor one as vice-presidential running mate, issues of which she was a fierce advocate.  Another of her hot-button topics was abortion of which she stated, “Having babies is a blessing, not a duty.” Once a lethal silence had enveloped the subject of breast cancer like a London fog; however, after seven weeks in the white House, she underwent a full mastectomy. She went public with her health issue and there resulted an unprecedented number of mammograms and mastectomies by other American women.  Upon her return from the hospital, the White House staff lined up with signs: We love you, Betty. Perhaps the American public was beginning to as well. Her Midwestern pluck made her an intrepid Woman-in-Chief.

During Ford’s bid for a second term, campaign buttons urged voters to “re-elect Betty’s husband.” The First Lady often gave speeches with smiling grace. She joked that if her husband lost she would get him back to herself, “so I win either way.”  When Jimmy Carter proved the victor, Betty blissfully contemplated getting back both life and husband. Before they left the White House, she took a moment to climb on a Cabinet table, beautifully set, and dance.

After leaving the White House, Betty became another emblem of courage. Ironically, the famously forthright first lady had been keeping a secret, even from herself. Over the years, alcohol and pain medicine had taken control. As the dual demons usurped her life, her loved ones staged an intervention and after initial denial-wherein she called them “a bunch of monsters-” she entered the Long Beach Naval Hospital. Alongside sailors and officers, she underwent a grim detoxification.

The Betty Ford Center was a direct result of Mrs. Ford’s victory over her addiction. The industrialist-tire heir and recovering alcoholic, Leonard Firestone, organized its funding and Betty served as chairwoman, working tirelessly till age eighty-seven to convince America addiction was not a moral failing but a disease like any other-one which deserved compassion rather than condemnation. She welcomed new patients with the words, “Hello, my name’s Betty Ford, and I’m an addict and an alcoholic.” Celebrities such as Elizabeth Taylor, Liza Minnelli, Mary Tyler Moore, Mickey Mantle, Robert Mitchum, Tony Curtis, Johnny Cash as well as 90,000 non-celebrities have adopted its motto of “clean and serene.” Betty’s favorite quip to Gerald was he was only an ex-President but she was an active one. Mrs. Ford was always a woman with a voice who once told a critic, “Being ladylike does not require silence.”

In her nineties Mrs. Ford asked her children “When are you going to let me go be with my boyfriend?” On July 8, 2011, she joined her dancing partner. Thousands mourned her passing-regardless of political affiliation. Because of her indomitable spirit, at the end everyone was a member of Camp Betty.