The November day in Dallas marked the demise of Camelot and bequeathed the indelible image of Jacqueline Kennedy draped in black as her son saluted the rider-less horse. Consigned to history’s shadow is the other widow and mother of two: Mrs. Marina Oswald.

Marina Nikoloyevna Pruskova, baptized in 1941, was born in in the town of Arkhangelsk, (Archangel), and grew up in Leningrad. She lost her father when she was two; her mother remarried an electrician who beat his stepdaughter. A friend who heard her reminisce about her childhood in war-torn Russia described Marina’s childhood as gruesome. After training as a pharmacist, the nineteen-year-old left for Minsk where she moved in with her aunt and uncle. She rarely smiled-a victim of Soviet dentistry. 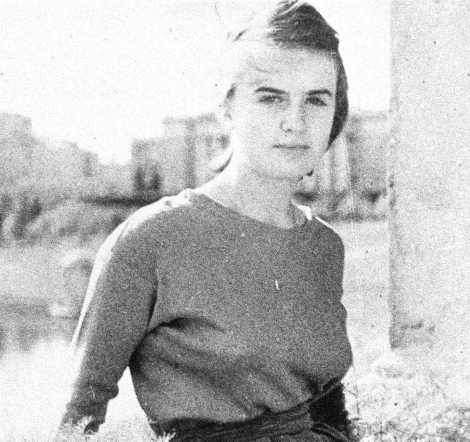 In 1961, while attending a medical party at the Palace of Culture, she met her first American- Lee Harvey Oswald- who had defected from the States in 1959. He stood out due to his heavily accented Russian and his brooding expression that reminded Marina of a romantic hero from a Tolstoy novel. He called himself Alik as his fellow sheet-factory workers associated Lee with a Chinese name. Deeply distrusted by the Soviets, officials arranged his relocation from Moscow to Minsk. His American status made him into a local celebrity.

Foregoing a declaration of love, Lee asked Marina to be his wife. He failed to mention he was on the rebound from a Russian-Jewish girl, Ella Germann, whose rejection had left him devastated. Marina cared for him and told her friends, “Lee not like anyone, but he loves me.” However, she was privy to his uncontrollable anger as occurred when he discovered that the Marine Corps had changed his discharge to “undesirable.” In response, he dashed off a letter to John Connally, who had just resigned as Secretary of the Navy to run for Governor of Texas, demanding that he take steps to repair his damaged reputation. Connally did not comply.

The couple bought matching wedding bands; unlike a Tolstoy romantic hero, Lee had his inscribed on the inside with a sickle and hammer. One draw of her fiancé was he had an apartment to himself, something that made him as a prize in the Soviet husband lottery. Her uncle, a colonel in the M.V.D. (Ministry of Internal Affairs), had already rejected one of his niece’s suitors because he did not want a nephew-in-law moving in as well. He also worried Marina’s suitor was a spy. Their marriage took place six weeks after their first meeting; June Lee was born the following year.

Lee became as disillusioned with the U.S.S.R. as he had been with the U.S.A. He boasted that his ancestor had been the famous Civil War General Robert E. Lee after whom he and his brother Robert had been christened. Marina readily agreed as visions of luxuries, unattainable under the Communist regime, shimmered like sugarplums. A further inducement: America was the home of the recently built Disneyland-purported to be the happiest place on Earth.

Post departure, Lee underwent a metamorphosis from Dr. Jekyll to Mr. Hyde. He became extremely controlling, something the independent Marina found intolerable. Their first residence was with his brother in Fort Worth, but Robert tired of the arrangement due to Lee’s mercurial mood swings, the stress of the baby, and the unwelcome scrutiny of a Soviet sister-in-law. Their next stop was with Lee’s mother, Marguerite Frances Claverie Pic Oswald Ekdahl, a New Orleans Mother Dearest. She was at a loss as to why her son was a high school drop-out, dishonorably discharged Marine with a chip on his shoulder the size of Texas. Not a fan of living with her mother-in-law, Marina was overjoyed when Lee found a job in a welding company. She told Marguerite, “Thank your God. Lee work.”

The Oswalds moved to a squalid Dallas apartment though it did little to put a bandage on their troubled marriage. To keep Marina alienated, Lee forbade her to learn English. He further attempted to change her habits that he felt was unbecoming in his wife: smoking, (Menthol,) drinking, (Vodka gimlets,) wearing makeup, going to the hairdresser. Another source of incompatibility was the bedroom, where a sexually frustrated Marina complained her husband missed the mark. On one occasion an enraged Lee used Marina’s shoulder as an ashtray to extinguish his wife’s cigarette; she gave as good as she received, and his face bore nail imprints. She complained to a friend from the Russian émigré community about “that idiot Alik who does not make enough money.” Her spouse’s redeeming trait was his adoration of Junie whose face resembled his own, and to whom he whispered, “Moia malenkaia devochka” “My little girl.” In defiance of her husband’s wishes, a Greek Orthodox priest secretly baptized June. Desperately unhappy but with no exit, Marina must have rued Ella Germann’s jilting.

A ray of light was Ruth Paine who befriended the Oswalds. She was a Quaker, recently separated from husband Michael who, unlike Lee’s mythological connection to General Robert E. Lee, was a descendant of Robert Treat Paine, a signer of the Declaration of Independence. Ruth invited Marina and June to live with her to help diffuse the couple’s marital and financial problems. The Good Samaritan arranged a job for Lee at the Texas Book Store Depository.

Although separated, Lee spent every weekend at the Paine’s home in Irving, a Dallas suburb. Despite their sexual incompatibility, Lee’s aim proved true on at least one other occasion and Audrey, (named after Audrey Hepburn, star of Tolstoy’s War and Peace,) Marina Rachel arrived in 1963.

Living on his own had not mellowed Lee’s disposition as evidenced with purchase of a rifle that he had ordered by mail under the name A. J. Hidell. He had chosen the alias because it rhymed with Fidel, (as in Casto,) what he would have christened a son. On one visit, he made Marina take a photograph of him posing with a rifle that he kept hidden in a blanket in the Paine’s garage. Her anxiety increased when Lee wrote her a note in Russian with instructions as what to do in the case of his arrest. Later, Lee announced that he was behind the aborted assassination attempt of former Major General Edwin A. Walker. What had spared Walter’s life was just as Lee had pulled the trigger his target had lowered his head to work on his income tax-thus becoming the only person whose IRA forms proved salvation. The justification for her failure to report her husband to the police, “A wife is a wife.”

On November 22, while watching television, Ruth translated to Marina the devastating newscaster’s words that President Kennedy had just been assassinated. Marina replied, “What a terrible thing. Now the children will have to grow up without a father.” Empathy for Mrs. Kennedy turned to a personal fear when breaking news speculated the shots had come from the sixth floor of the Texas Book Store Depository. Oblivious, Ruth stated that Lee would have quite a story to tell when he came home. Marina now understood why Lee had left his wedding band and $175.00 in a teacup on her nightstand.

When police officers from the Dallas County Sheriff’s office arrived, Ruth assumed they were there to serve her divorce papers and wondered why it required so many officials. Marina understood all too well. The detective in charge announced that Lee was in custody, charged with wounding Governor Connally, the murder of police officer J. D. Tippit, the assassination of President Kennedy.

The Archangel of Marina’s youth had vanished. She did not speak English, had two young daughters, (one only weeks old,) few dollars to her name, was a Russian amidst the Cold War, and possessed the most reviled surname since Booth. When her mother-in-law showed up, Marguerite shouted at Marina that she was a whore and was responsible for her son’s trouble. Ruth did not feel a translation was necessary. When a reporter from Life Magazine arrived, Marguerite screamed at him for taking photographs She amened her comment that he could only do so for a price. The journalist dubbed her ‘Hurricane Momma.’

The next day Marina, along with her children, paid a jail house visit with her husband, (who sported a black eye,) where they communicated through a glass wall by telephone. The meeting was of five minutes duration and Marina left in tears. She relayed their conversation, “I tell Lee I love Lee and Lee says he loves me very much, and to be sure to buy new shoes for June now that she is walking.” Marina was the most wanted witness in America, and the Federal Bureau of Investigation took her to the Inn of the Six Flags for questioning. Under the duress of deportation, they pressured her to talk. During her interview, Marina chain-smoked and drank coffee. Even more grueling was her twenty-hour grilling during the Warren Commission. Although she did not mention it till later, she posited her theory that Lee had targeted John Connolly, rather than John Kennedy.

Marguerite, relishing the limelight, proclaimed to the press, “I am an important person. I understand that I will go down in history too.” She sent a wire to President Johnson asking for legal representation for her boy. When the White House responded she should direct all future messages to the Warren Commission, she retorted, “I’ve got as much right as any citizen to write the President of the United States. And Mr. Johnson should also remember that I am not just anyone, and that he is only President of the United States by the grace of my son’s action.” She insisted that her son be interred in Arlington National Cemetery; Robert set out to find a funeral home that would agree to bury his brother.

After Lee’s murder at the Dallas prison-a scene replayed endlessly on international television Marina insisted on viewing her husband’s body. Marguerite also fumed that, as an American citizen, she had as much a right to seeing her son’s body as Jackie Kennedy had to see her husband’s. The Secret Service agents agreed to drive to Parkland hospital, (the same one that had received President Kennedy.) A doctor pulled up the sheet that revealed the area where Jack Ruby’s bullet had lodged in Lee’s torso.

On Monday morning Marina, accompanied by her daughters, Marguerite, and brother-in-law, stood in an old stone chapel at Fort Worth’s Rose Hill Cemetery where private rites were delivered. The Lutheran minister failed to show up, and reporters pitched in as pallbearers and carried the pine box. During the minister’s hurried prayer, Marguerite shrieked at reporters who were clicking their cameras, “Privacy at the grave!” The coffin opened for a final farewell and Marina slipped her ring on Lee’s finger. On top of his grave that held a small headstone and a cross, she placed a pot that held nine pink plastic roses.

After the funeral, Marina spurned contact with Ruth, John, and Marguerite with the explanation, “This is too much bad for me.”

Throughout her tumultuous marriage, Marina’s soul had engaged in a tug-of-war- caught between loyalty to Lee and hatred at the horror he had unleashed. As she had confided to Ruth, “Mezh dvukh ognei” “caught between two fires.”