On August 15, 1945, eight days after the first atomic bomb had annihilated thousands of people, Emperor Hirohito delivered a radio broadcast that marked the first time the public heard his voice. He stated that Japan would have “to endure the unendurable and suffer the unsufferable.” The head of an ancient kingdom had accepted the Allied Powers’ demand for unconditional surrender. By his action, Hirohito had saved his country and the chrysanthemum throne, (the name of Japan’s monarchy).  Those who preferred death to the dishonor of surrender committed suicide in front of the palace. At the other end of the spectrum, millions flooded into Manhattan’s Times Square, and the iconic photograph of the sailor planting a kiss on a nurse became the symbol of America’s elation as the curtain descended on World War II.

For most girls in their early teens, the future is an unchartered territory. Yet this was not the situation with Nagako, the eldest daughter of Prince Kunihiko Kuni, a descendent of a thirteenth century emperor. As with the daughters of nobility, she attended the elite Joshi Gakushuin School in Tokyo. At age fourteen, Nagako received a summons to visit the imperial palace, where, along with other girls, she took part in a tea ceremony. Hidden from view, Crown Prince Hirohito watched from behind a screen. Counter to tradition, he was to choose his own wife, and he set his sight on Nagako. The prime minister, from a rival clan to Prince Kuni, angered at Hirohito’s choice, fostered rumors that Nagako had color-blind relatives that would taint future royals’ bloodlines. The politician felt her lineage was not impressive enough to become the wife of a future emperor, who, upon his ascension to the throne, would be revered as a living god in keeping with the prevailing Shinto religion. The sixteen-year-old Hirohito would not be swayed; though Nagako was not the most beautiful of women, he felt she was his destiny. Nagako left school to begin the six-year-training to attain the accomplishments she would need as the royal consort. During this period, under the eyes of chaperones, the couple only met on nine occasions. 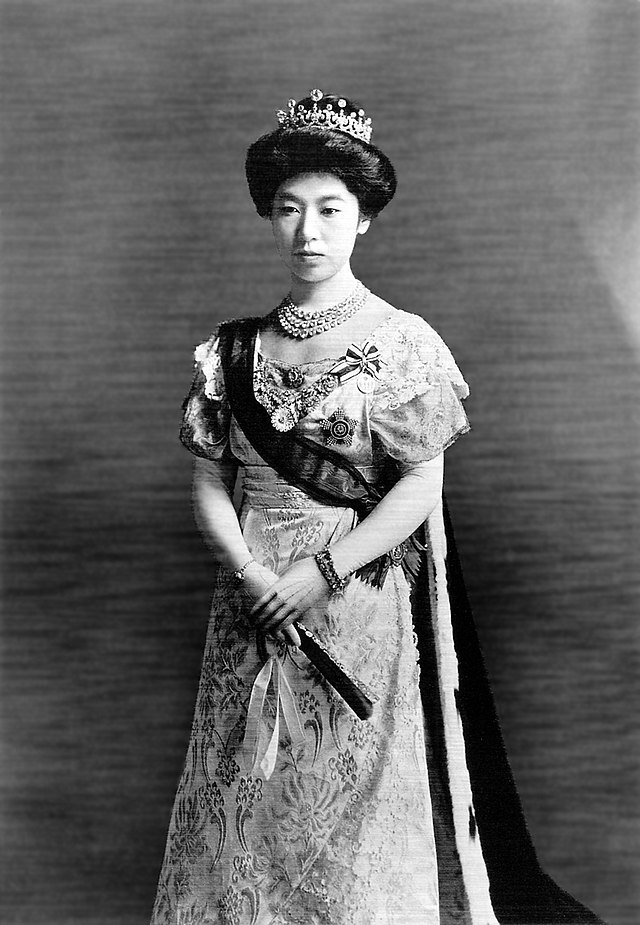 The catastrophic Tokyo earthquake of 1923 delayed their wedding, but on January 26, 1924, Nagako and Hirohito wed in a Shinto ceremony. Two years later, his dissolute father, Emperor Taisho, passed away, and Hirohito ascended the chrysanthemum throne-the world’s oldest dynasty, in a ceremony in Kyoto. Whenever the husband and wife travelled through the streets in their Rolls Royce, onlookers bowed their heads, as commoners could not look upon the imperial couple. The Japanese people revered the Emperor as the Son of Heaven, the 124th direct descendent of the Sun Goddess.

Content to remain cloistered in her palace, protected by a moat and high walls, Nagako played the piano, violin, and the Japanese harp. She composed 31-syllable poetry, waka, and painted landscapes and still lifes. She signed her artwork as Toen or Peach Garden. Hirohito was also content in the royal palace, and yet, deeply devoted to duty, performed all imperial obligations. On the military parade grounds, resplendent in royal uniform, he sat astride his famous white stallion, Shiroyuki, White Snow. Nevertheless, Hirohito was more in his element where he peered into his microscope in the palace laboratory where he built an eminent reputation in the study of the marine microorganisms known as hydrozoa.

The couple was devoted to one another; she called him okami, “honorable master,” and he affectionately nicknamed her Naga-Miya or princess Naga. However, her prime responsibility was to produce a son, heir to the ancient throne. To the couple’s deep consternation, after a decade of marriage, Nagako had given birth to four daughters; however, only a male could inherit the throne. Members of the Imperial Household Agency cruelly nicknamed the Empress onna bara “girl womb.” The military pushed for Hirohito’s abdication in favor of his younger brother, the father of sons. Similarly, couriers encouraged Hirohito to bring back the thirty-nine concubines he had dismissed after his marriage; even if a boy were born outside of marriage he would be eligible to become the next emperor. They also submitted photographs of suitable young women while the court ladies took to wearing their most alluring dresses and dousing themselves with perfumes. Hirohito refused to partake of the palace-sanctioned promiscuity. In 1933, another royal pregnancy resulted in the birth of Akihito, an event his mother called “the happiest moment in my life.” The boom of canons sounded the joyous news. Another son and daughter followed. Ironically, the deity and his wife had limited power as court officials pulled the strings. When Akihito was three, he went to live with attendants who treated him with great veneration though little warmth, and he endured a lonely childhood. Nagako, who always tread the line of duty, never publicly voiced a complaint about the painful separation.

A Chinese curse states, “May you live in interesting times;” however, this was not to be Nagako’s fate. During World War II, Japan’s generals used the emperor as a symbol of propaganda, and he made comments such as, “Your life is as light as a feather, but your life loyalty is as heavy as a mountain.” With these phrases Hirohito sent off thousands to fight and die, many in suicide missions. Their dying words were the battle cry “Banzai!”

The degree to which Hirohito bore responsibility for Japan’s involvement in the war is mired in the gray area of subjectivity, and little is known about his wife’s views of the nightmare years. The only insight she offered was when she described the era as the hardest time of her life. She also stated that, “her heart was in pain when she saw the emperor deeply agitated every day during and immediately after World War II.”

Nagako put aside her poetry and painting in order to contribute to the war effort. She rolled bandages, knit scarves for the generals, and wrote letters of condolence to bereaved families. The Emperor and Empress remained in the imperial palace in downtown Tokyo though they sent their six children (a daughter had died at age two) to the countryside for their protection.

At the close of World War II, Nagako, as with the rest of Japan, was reeling from the horror of Hiroshima and Nagasaki, as well as her country’s formal declaration of defeat. She was also terrified that the Allied Powers were going to execute her husband as one of the architects behind the bombing of Pearl Harbor. To her great relief, General Douglas MacArthur, the American commander of the Allied occupation of Japan, thought it best to keep the Emperor on his throne as a unifying force in a devastated and politically unstable country. The formal surrender took place aboard the battleship Missouri in Tokyo Bay. The Emperor and Empress, no longer considered divine, made public appearances where they offered solace in a charred wasteland.

While Nagako proved a devoted wife, spouse, and Empress, she was a despotic mother-in-law who was aghast when Akihito wed Michiko Shoda, a commoner. Mother-in-law dearest denigrated the Crown Princess from her choice of clothing to the manner in which she raised her children. Michiko, a college educated, liberal minded woman, chafed under the attacks. She regarded her chief lady-in-waiting as a spy for Nagako, and, along with her husband, fought to have her dismissed. The Imperial Household Agency did not grant their consent. The intrigues took its toll on Michiko who became increasingly gaunt and withdrawn; possibly as a result of nervous breakdowns, she lost her ability to speak for several months.

In their twilight years, Hirohito and Nagako were content to live in seclusion in their two-story Western style Fukiage Palace. Constructed in 1961, it stands in the spacious 300-acre grounds of what, in feudal times, had been the Do castle, the moat-surrounded residence of the Tokugawa shoguns. However, while Japan became an economic powerhouse, the Emperor and Empress appeared an unassuming elderly couple. Nagako remained the doting wife who placed a bouquet of fresh roses on her husband’s desk each morning, a far cry from their days when he was a living god, and she his consort.

The Empress’ first time abroad was on a 1971 European tour trip where she presented Queen Elizabeth II with one of her original paintings. Though they experienced protests due to the emperor’s wartime involvement, Nagako stated going abroad was “the most enjoyable experience of her life.” Four years later, she accompanied her husband on a visit to the United States where she met President Nixon in Anchorage and shared a handshake with Mickey Mouse in Disneyland.

The Empress, after spending eleven years as a widow, passed away in 2000, at age ninety-seven; after a Shinto funeral, she joined her Emperor to whom she had been married for sixty-five years, in the imperial mausoleum. Flags flew at half-mast, and the lights were turned off in Tokyo Tower, a replica of the Eiffel Tower.

Never one to wear her heart on her sleeve, history would have gained a peephole into her ziplocked heart had Nagako revealed her response to Hirohito’s question to his wife after the Allies had stripped him of his divine status, “Do I look more human to you now?”